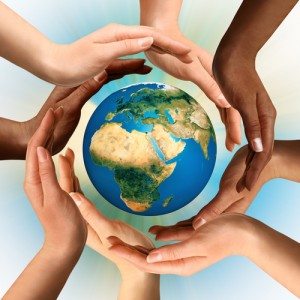 The reasons for cyberspace.

Computers are often criticized for being too virtual, having too little to do with the real world. There’s some substance to these criticisms. The virtual world doesn’t automatically have anything to redeem it.

Yet it’s useful to understand how the worlds we are building came to be, and what kinds of virtuality are possible.

The Essence of the Virtual

Let’s look at some examples of how virtual, imaginary, and constructed worlds have entered our culture.

Language itself is possibly the first abstract space. Through language, humans become able to apprehend abstraction and to conceptualize experience. The world of words is intoxicating to discover–witness any two-year-old learning to talk. Humans are amazingly good at language.

One of the first thought spaces was probably Plato’s concept of the Realm of the Ideal. Plato postulated another realm, of perfect concepts whose pale shadows we see embodied around us in the natural world. And Plato believed all thought occurred in this realm of perfect form. Ideas have a life of their own.

Beyond this, any pretend world, any stage drama or performance, is an artificial space of a kind. The ability to assume and shed roles is a deep part of human life.

The exhilarating thing about the Web is that it is a new manifestation of these “virtual” qualities. It is a world of words, where distance is measured by how similar two ideas are, or how closely aligned two groups of people are. The shape of cyberspace is influenced more by the connections people choose to make (and are interested in making) than by where in the world those people are located. The Web gives form to the connections between people and ideas.

The Loss of the Commons

Those who rue white flight in cyberspace also lament the destruction of more organic means of connection. Time was, most people spent their whole lives living in one town, caring for their parents, raising their kids. The world was much more stable then–you knew your neighbors. You were part of your community, and your community was those near whom you lived.

This had a lot to recommend it–humans are probably best at living in a situation where they are close to those with whom they’re close. The dissociation and alienation apparent today is closely related to the huge movements of population around the world. The price of the freedom to seek a better life is the loss of the comforting, well-known hometown.

It is lamentable that the move to the big city has disrupted so much of the pattern of human life over the last century, especially as technology exacerbates the shift. But the flip side of the hometown’s security is its oppressive conformity. In a small community, fitting in can be the most important thing in life. It can be hard to talk about your life with your neighbors, when their disapproval is potentially hazardous.

The Importance of the Real

The Net will never provide, of itself, meaningful connections with others. But some of the qualities of the net make it very well suited to addressing some human needs which have become ever more urgent.

If you have a question, or if you need someone to talk to, the Net is always there. The net can often be a more supportive community than your actual community, if you are facing something about which you are ashamed or fearful. And the net can expose you to new ideas and information. Many many questions can be answered, if only hastily, just by asking.

As the Web of connections becomes ever thicker, it will start to connect more intimately to the real world. All of us have interests and ideas which we share with others. The Web makes it easier to find those people your ideas connect you to. This is not a substitute for the community feeling that comes only from sharing lives together… but it does, perhaps, make it more likely you will find people with whom you’d like to share your real life, or ideas that you’d like to integrate into who you are. (The Web is inherently open, to all views and all ideas; this is in my view a good thing.)

This, then, is the potential of the Web: to reduce the distance between us, by giving us new ways to converse with one another, in terms of the beliefs we share. The Web may not be revolutionary–we all share our worlds, by living and meeting people and making our lives–but the Web is a new kind of space in which our virtual selves, our words and thoughts, can mingle. The bigger it is, the more relevant it will be.

I’ve collected some examples of this way of using the Web. For another perspective on how important reality-based cyberspaces are, see David Gelernter’s fine book, Mirror Worlds.